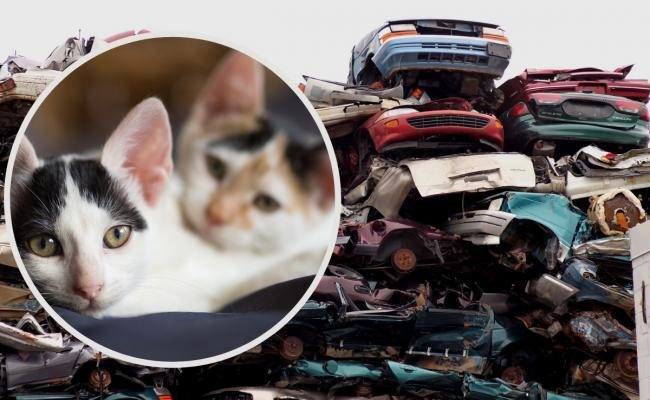 A quick-thinking couple from Wokingham have saved two kittens, that were just minutes away from being crushed to death, after discovering them trapped inside the engine of a car in a scrap yard.

Charlotte Drablow and Tommy Harper, who works at a scrap yard in Wokingham, have now adopted the kittens and named them Garfield and Odie.

Tommy said: “We crush hundreds of cars every day and line all of them up ready for the crusher. As I walked past the cars waiting to enter the crusher, I heard an unusual noise coming from one of the vehicles. I soon realised it was meowing and opened the bonnet of an old Ford Mondeo.

“I could see a tiny grey tabby kitten and further down inside the engine was another ginger tabby kitten that was well and truly stuck! The grey kitten was really stressed and hissing a lot, I think he was trying to protect his mate. I rang my partner and asked her to come straight down to help.”

Charlotte added: “Both the kittens were tiny and looked really ill. One of the baby kittens was stuck deep inside the engine and the other refused to leave its side. After a bit of a struggle, we managed to carefully extricate the ginger tabby kitten, which was extremely malnourished and very unfriendly and scoop up the grey one too! Both of the kittens were hissing at us as they were obviously very frightened. We looked everywhere to see if there were any other kittens in the other cars and hoped we might find the mum, but it was just the two of them.”

Charlotte headed straight to Harrison Family Vets at The Point on Shepherds Hill in Woodley so they could be checked over. Charlotte added: “The team there were absolutely fantastic they diagnosed them with cat flu and gave me antibiotics, eye ointment and worm and flea treatments for free as we had rescued them.”

Clinic director and vet, Ana Bonache, said: “Cat flu can be serious in kittens, and both had the tell-tale symptoms with a fever, runny eyes and noses and they were dribbling and sneezing too. We were keen to help Charlotte as she had saved Garfield and Odie from a terrible fate and was going to provide them with a loving, family home.”

Charlotte added: “Ana gave us the very best care, treatment and advice and we will always use Harrison Family Vets for our lovely kittens from now on! Since we have brought them home, they’ve improved so much. My nan, Sharon Drablow, has rescued cats for years and is a real expert, so she has guided us through the whole process, and they have put on weight and are feeling much better. Both the kittens are still joined at the hip, but I think they have a bit of a crush on me now as they follow me all around the house! They are like a pair of little ducklings and treat me as their mum!”

Harrison Family Vets is an independent veterinary group that opened its very first practice in Woodley last month. The practice is entirely designed around the pets it treats and features an array of ground-breaking initiatives. In addition to offering an on-site laboratory, full x-ray suite, operating theatre and ultrasonography, the practice has separate dog and cat wards that have been carefully designed with mood lighting, aromas and music to create a calming atmosphere.

There’s also a unique waiting area featuring bespoke pods, which give clients their own space and offer pets privacy, thus shielding them from the stresses of facing other pets in a traditional waiting room. Each pod has its own tablet where clients can update their details and even order fresh, healthy pet food.

Many pets have more acute hearing than humans, so the loud bangs and whistles –…

Our website contains a range of useful information. If you cannot find the answer to your query, please get in touch.
Contact us
Copyright Harrison Family Vets. 2021 - All Rights Reserved
We use cookies on our website to give you the most relevant experience by remembering your preferences and repeat visits. By clicking “Accept All”, you consent to the use of ALL the cookies. However, you may visit "Cookie Settings" to provide a controlled consent.
Cookie SettingsAccept All
Manage consent

This website uses cookies to improve your experience while you navigate through the website. Out of these, the cookies that are categorized as necessary are stored on your browser as they are essential for the working of basic functionalities of the website. We also use third-party cookies that help us analyze and understand how you use this website. These cookies will be stored in your browser only with your consent. You also have the option to opt-out of these cookies. But opting out of some of these cookies may affect your browsing experience.
Necessary Always Enabled
Necessary cookies are absolutely essential for the website to function properly. These cookies ensure basic functionalities and security features of the website, anonymously.
Functional
Functional cookies help to perform certain functionalities like sharing the content of the website on social media platforms, collect feedbacks, and other third-party features.
Performance
Performance cookies are used to understand and analyze the key performance indexes of the website which helps in delivering a better user experience for the visitors.
Analytics
Analytical cookies are used to understand how visitors interact with the website. These cookies help provide information on metrics the number of visitors, bounce rate, traffic source, etc.
Advertisement
Advertisement cookies are used to provide visitors with relevant ads and marketing campaigns. These cookies track visitors across websites and collect information to provide customized ads.
Others
Other uncategorized cookies are those that are being analyzed and have not been classified into a category as yet.
SAVE & ACCEPT